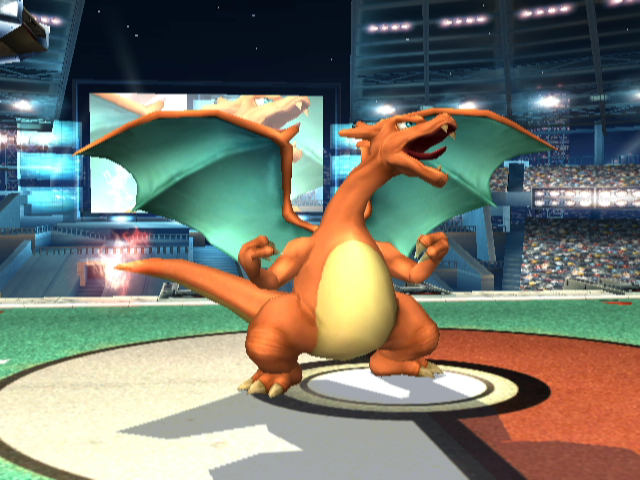 Charizard is a Fire/Flying type Pokémon from the Kanto region that is known for its grandiose power and its fiery temper. In Super Smash Bros. Brawl, Charizard could only be selected via Pokémon Trainer, who controlled Squirtle and Ivysaur as well. In Project M, Charizard is a wild Pokémon, independent from the Pokémon Trainer and the other Pokémon. An important thing to note is that Brawl's elemental weakness system has been removed, so you no longer have to worry about a foe's (rare) aquatic abilities. Instead of focusing around swapping Pokémon and stamina limits, Charizard in Project M has a new move set that effectively represents his blend of fire and flying type. 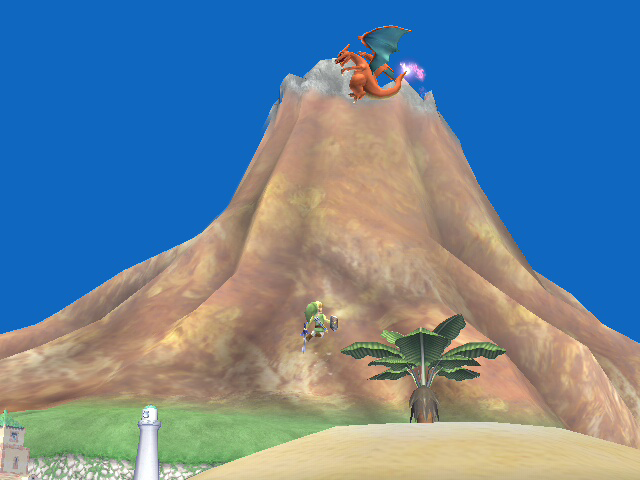 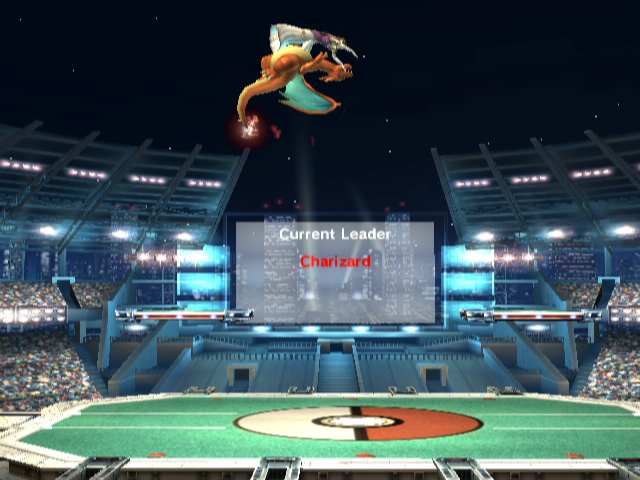 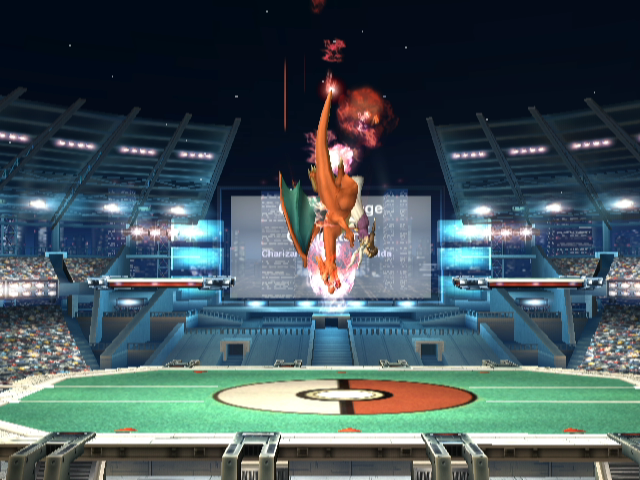 In Project M, this winged lizard has been tweaked to employ a very unique aerial game. Several of his ground attacks now act as launchers which send foes above him so that he can chase them into the air. These launchers include his jab, the majority of his tilts, smashes, down throw, and his brand new up throw that is based on the Seismic Toss motion from the animated series. Charizard now has several tools at his disposal to chase his foes, including a highly versatile set of aerial attacks as well as a new down special: Fly. Indeed, whenever Charizard uses this move from the ground, he will be able to perform a quick high jump and continue to attack his foes. It can also be charged to gain even more height. When used in the air, down B will instantly allow Charizard to glide. This gives him the opportunity to better utilize his glide attack!

In order to fight against Charizard effectively, it is highly recommended to know how to properly influence your knockback trajectory once you've been hit. Charizard's best killing options send foes vertically, and he is quite capable of getting opponents near the top of the screen and leaping in for a finishing strike unless you think quickly. His Down-Air also allows him to stomp recovering foes to the bottom of the screen. 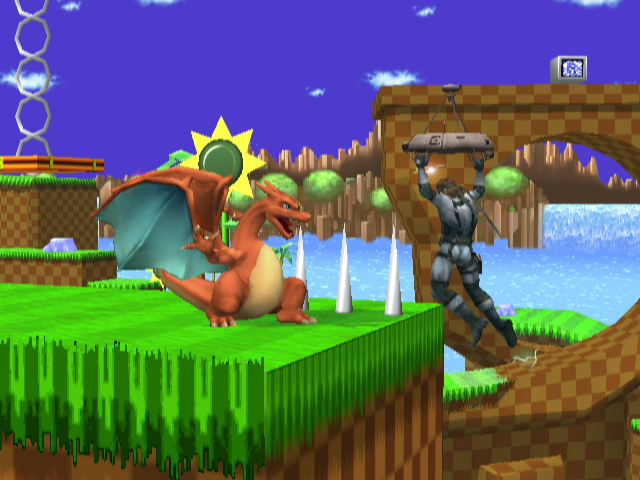 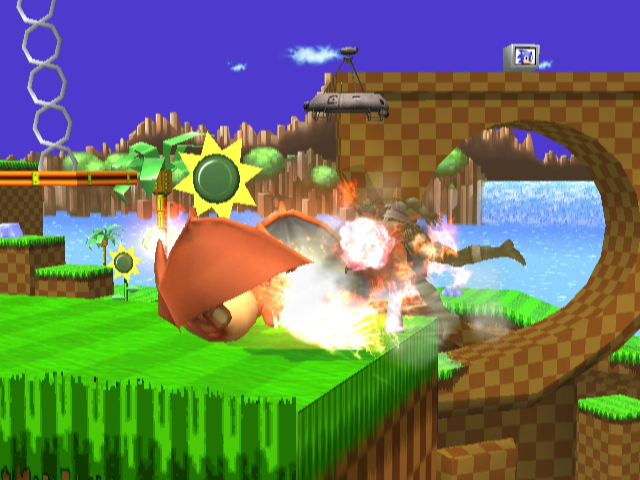 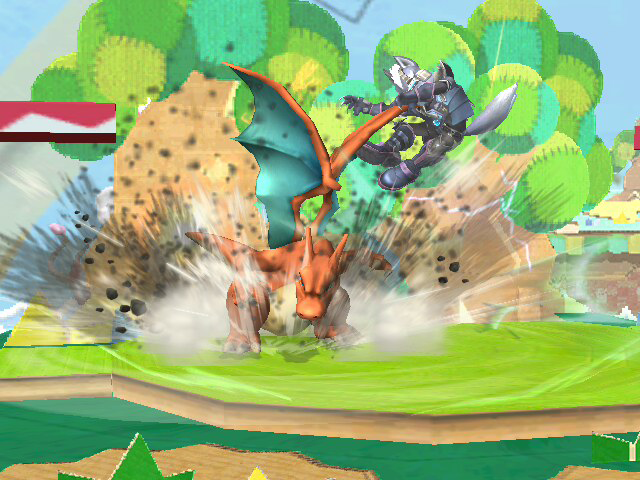 While the bulk of Charizard's combat involves launching foes into the air and chasing to them, he has other special moves to help. Charizard's Neutral B has not changed greatly from its incarnation in Brawl; it still can be angled, and used to annoy characters who are attempting to recover. His Up Special, Fire Spin, causes Charizard to spin rapidly upwards, protected in flames. This move is not only used to recover, but also to finish off foes with style. Side-Special is a brand new move called Heat Wave that replaces Brawl's Rock Smash. Heat Wave is a risky move that creates a brief wall of flames before him. The closer the foe is to the blast point, the more damage and knockback they will take. It is a situational move that requires good timing and spacing. 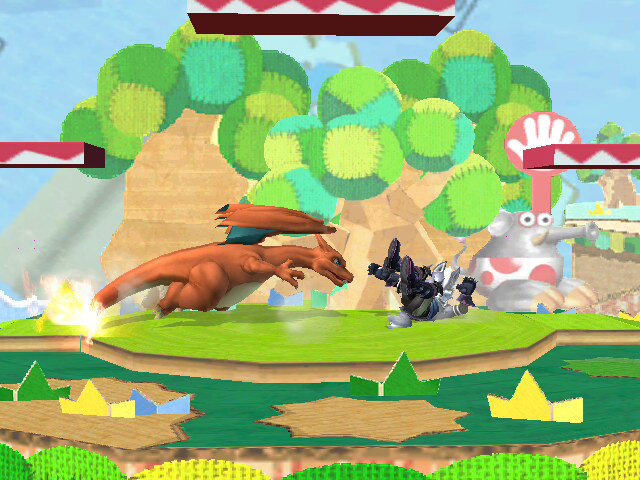 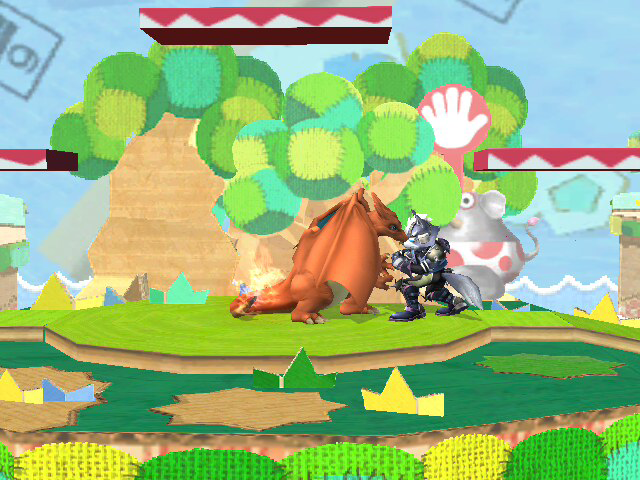 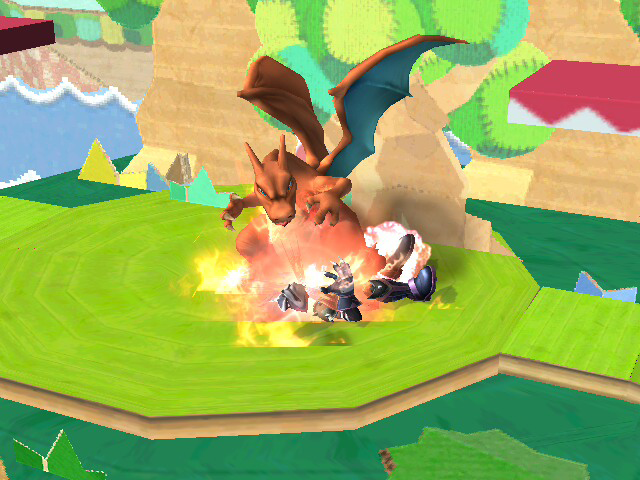 Despite his large size, Charizard is a very mobile character. His Down Throw keeps his prey near, similarly to Fox and Falco's down throw. If Charizard can accurately guess where a foe is teching after this throw he can use his aerials to chase those who attempt to roll out of the way, or even use an easy launcher on those who failed to tech. He may even be able to grab them again with appropriate timing. His size and range allows him to cover much space but also make him an easy target. Charizard is the perfect character for those who are not afraid to take their battle to the skies.