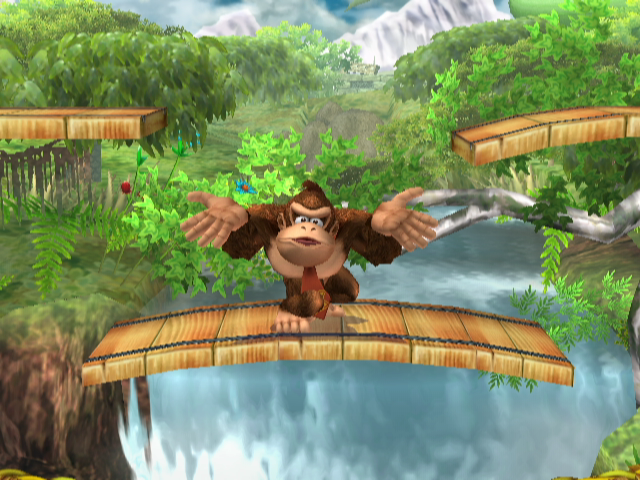 The king of swing... the thrilla gorilla... the prime primate... It's Donkey Kong! DK swings into Project M ready to lay the hurt on his opponents.

Everyone's favorite Kong has never really had an especially impressive showing in a Smash title, but with a Melee-based design and specially made changes to his moveset, he hopes to change that in Project M. Donkey Kong is unique in that he can decimate fast-fallers with extended combos, platform tech-chases and gimps. Yet he can still combat floatier characters via spacing aerials and tilts to rack up damage before landing a killing blow. Going hand in hand with his survivability, DK is very susceptible to combos. If you plan to use the good ol' monkey, keep this key weakness in mind and do your best to avoid combo setups as you attempt to land your own. 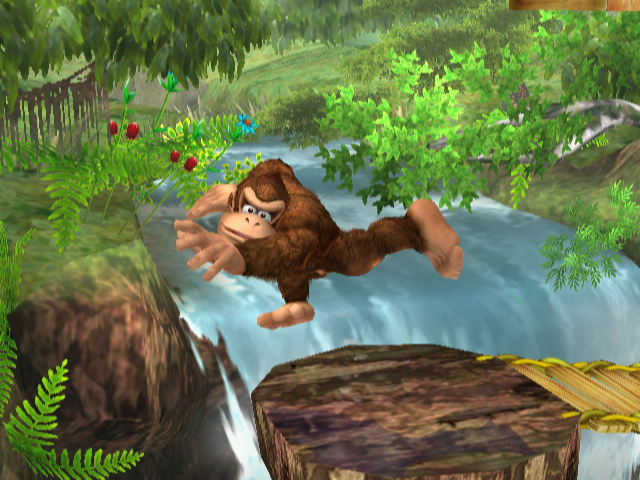 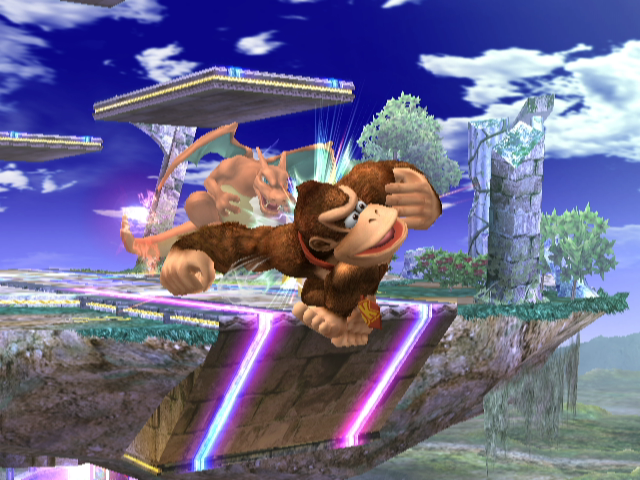 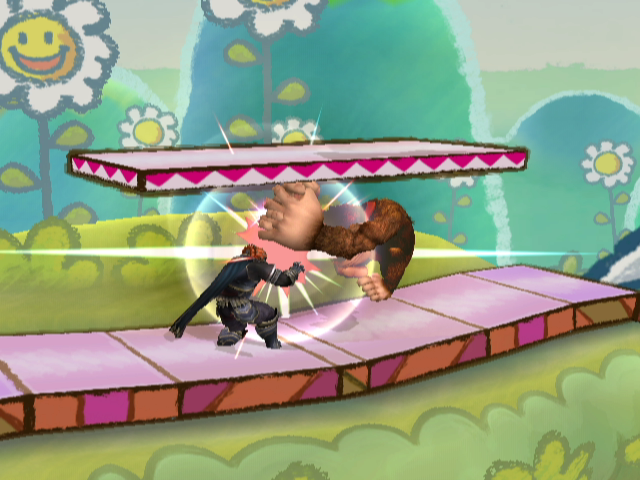 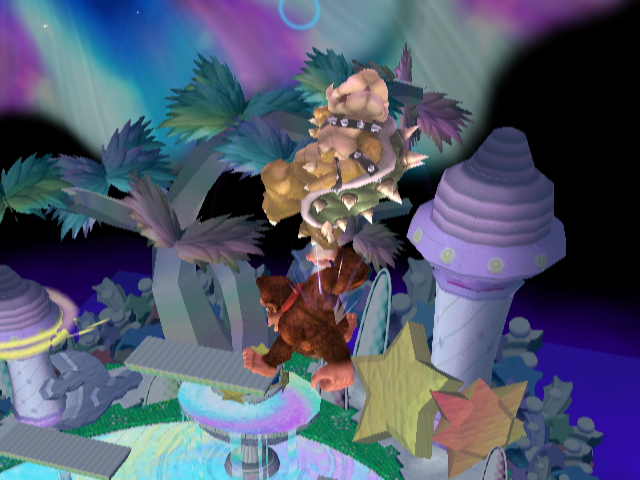 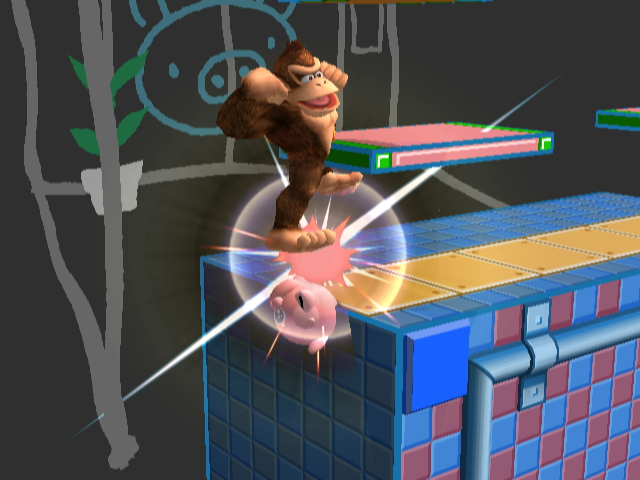 While our banana loving chum is well known for spacing Back-Aerial primarily in previous titles, he now has more tools in his arsenal. One of DK's most potent weaknesses in Melee was not having a forward-facing approach option. To resolve this, Neutral-Aerial is now an effective approach option; it was given more range and slight invincibility on his arms during part of the attack.

Donkey Kong's Down-Aerial saw little off-stage use due to its excessive endlag. This has been shortened, so DK can now use it edgeguard. Its on-stage options are all still very potent; it sets up very well for Up-Aerial strings as well as a charged Up-Smash on a faster-falling characters. His Forward-Aerial retains its usefulness from Melee, yet it comes out a bit faster and its KOing potential was improved to compensate its sluggishness. Needless to say these, among other improvements, will turn DK from a mediocre opponent to a formidable one. 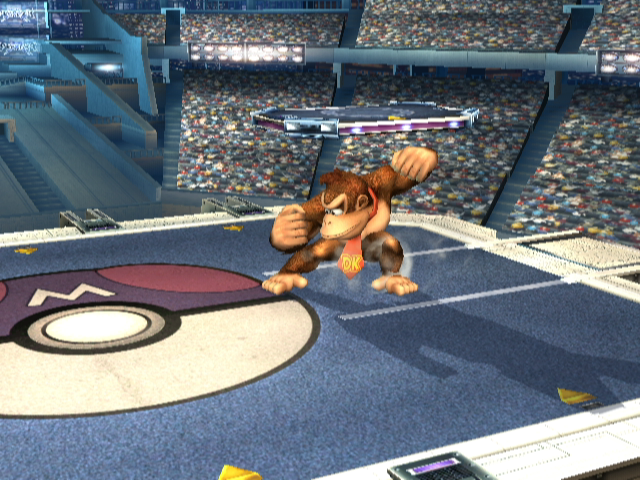 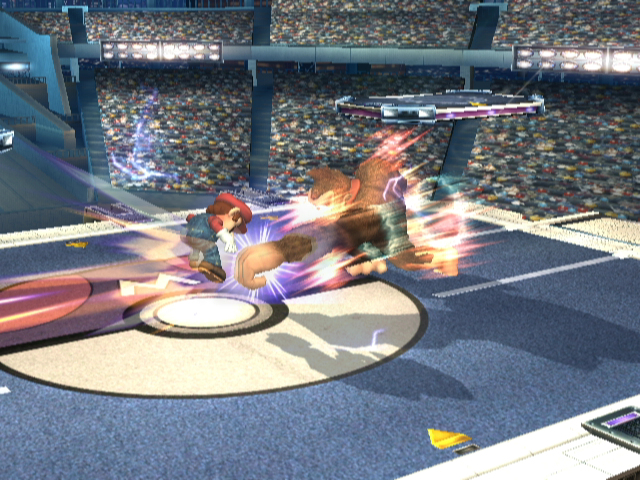 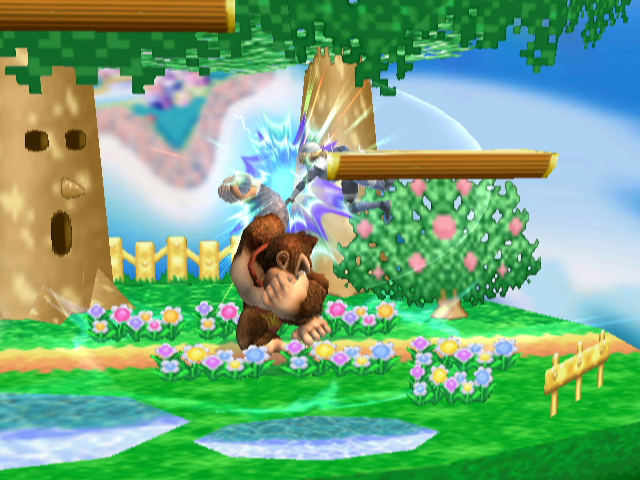 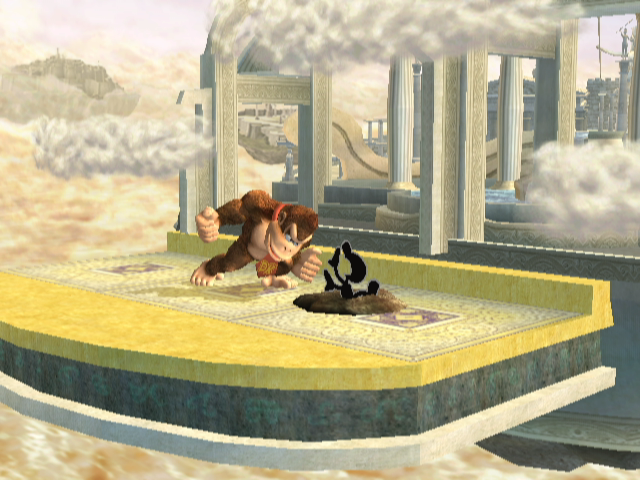 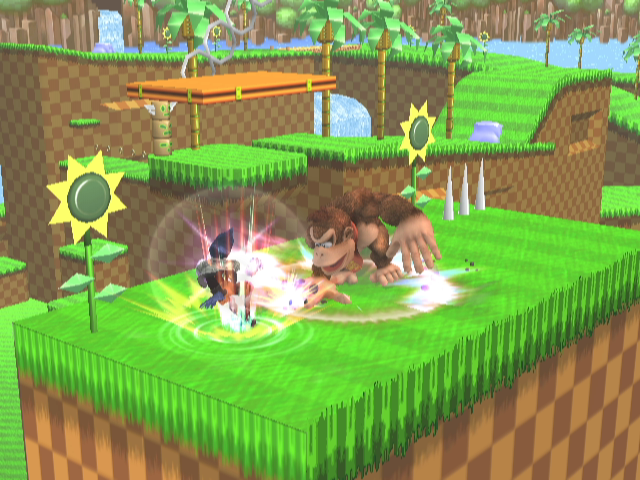 Donkey Kong like every character has very important Special attacks. His Giant Punch is one of the strongest moves in the game and can be comboed against many characters. While on the ground, Spinning Kong has a strong, quick hitbox that's very useful out of shield. In the air, it helps him to recover and to edgeguard.

A bit more of a situational move, DK's Side-Special is Head Smash. It's more useful as an edgeguarding spike than onstage. Lastly, the Kong is able to Down-Special and smack the ground launching foes into the air ready for juggling with his Hand Slap. 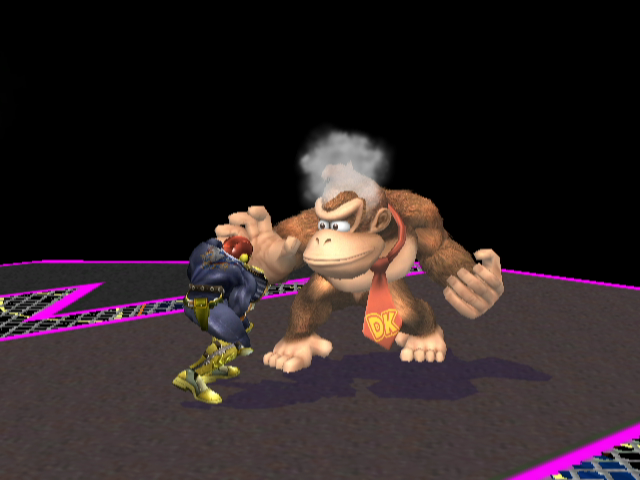 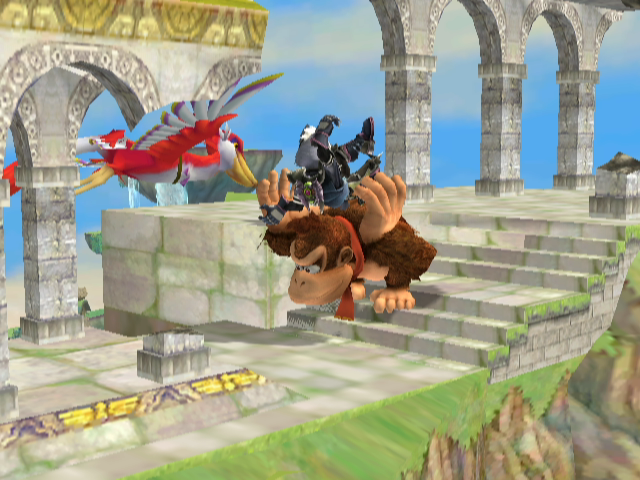 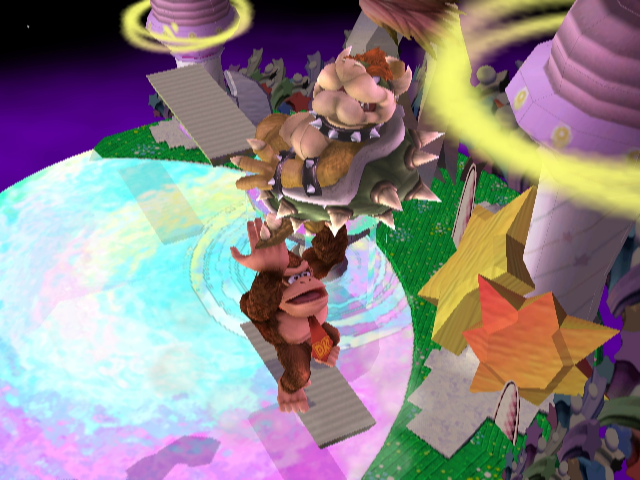 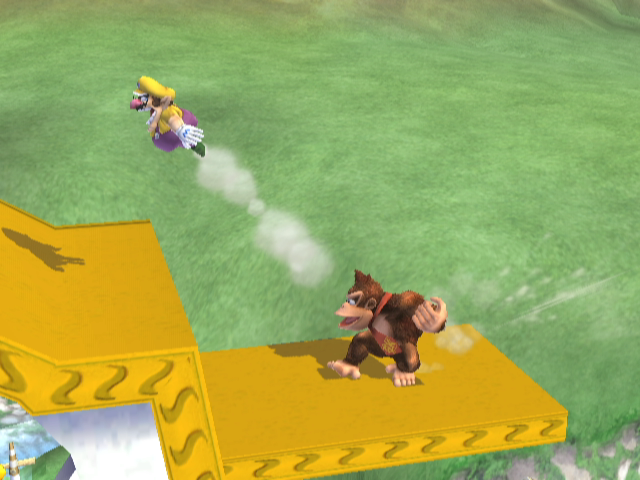 With those large gorilla arms, it's not surprising that big ol' ape has an exceptional grab game. His normal Forward-Throw actually goes into his Cargo Hold, which grants him four new throws (Cargo-Up/Forward/Down/Back) and the ability to carry his opponent to a more strategic position. Like in Melee, DK is able to chaingrab fastfallers and chain Up-Aerials into re-grabs for death combos if performed correctly.

Donkey Kong's Back-Throw was given a little more Knockback to assist in killing. His Cargo-Forward and Cargo-Back throws also can combo into his Neutral-Aerial if the opponent DI's incorrectly. His Cargo-Up Throw comboing against most characters into Up-Aerial; that's pretty likely. Indeed, Donkey Kong's grab game makes him a unique and powerful character. 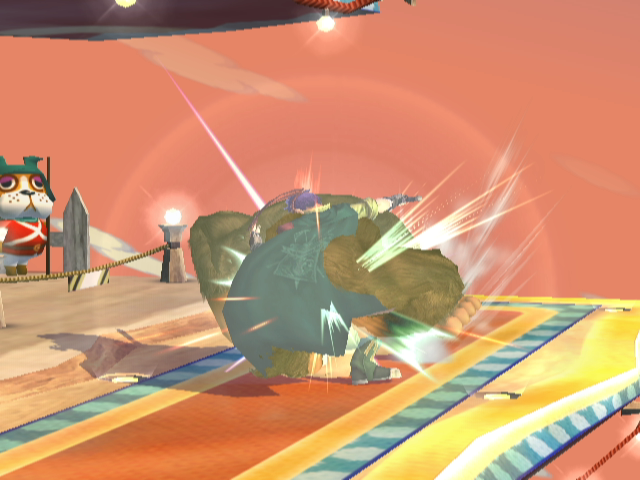 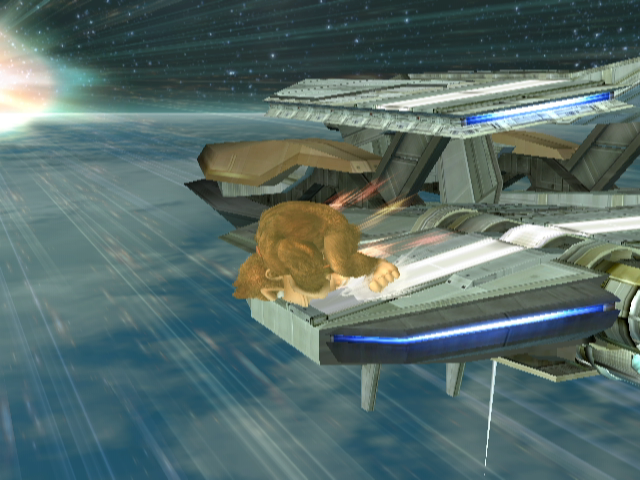 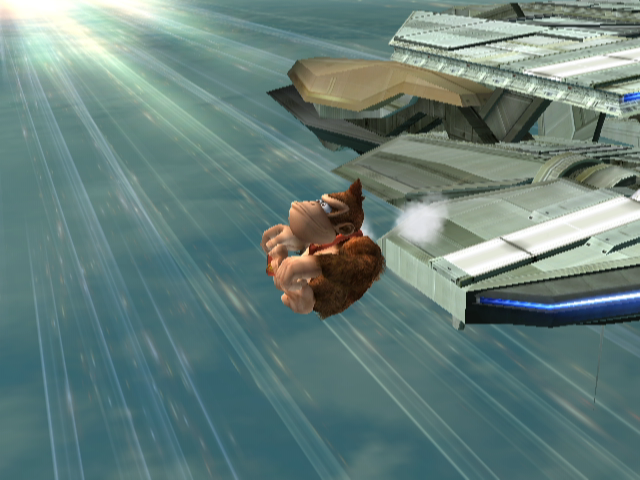 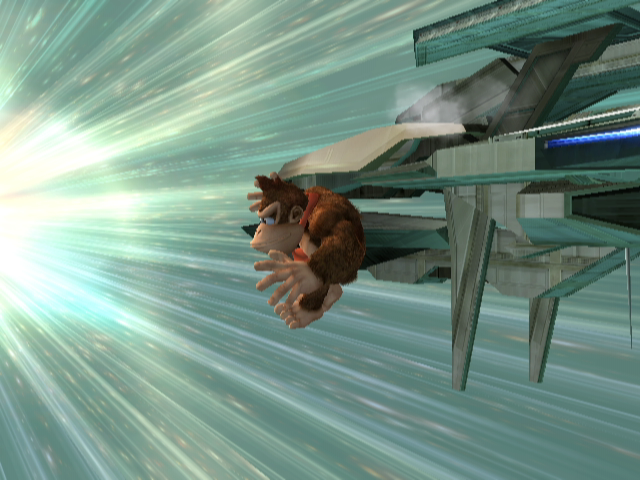 Fans of the Donkey Kong Country series will recognize Donkey Kong's new Dash Attack. Perhaps one of the most important of his changes, Dash Attack is able to power through weaker moves such as jabs and Falco's Blaster shots, and launches opponents for a Neutral-Aerial or Up-Aerial.

Much like Kirby's Melee Dash Attack, DK's sports the ability to continue off of the edge of a platform, leaving the Kong ready to attack. This grants DK several options while onstage as well as when he's preparing to edgeguard. DK is also able to jump out of his Dash Attack when he's off-stage. Needless to say, this Kong's new Dash Attack is very useful.