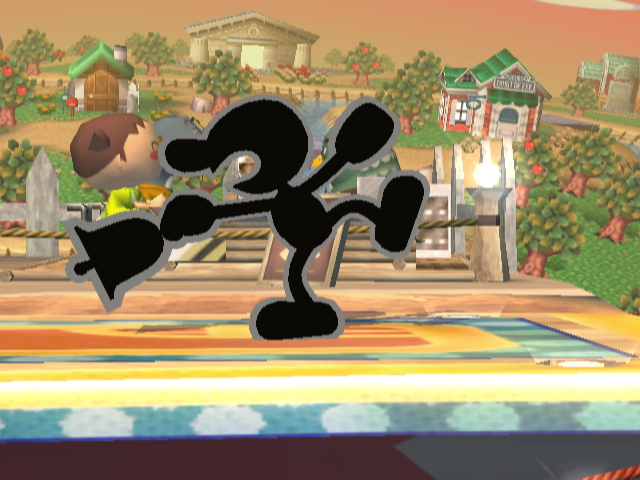 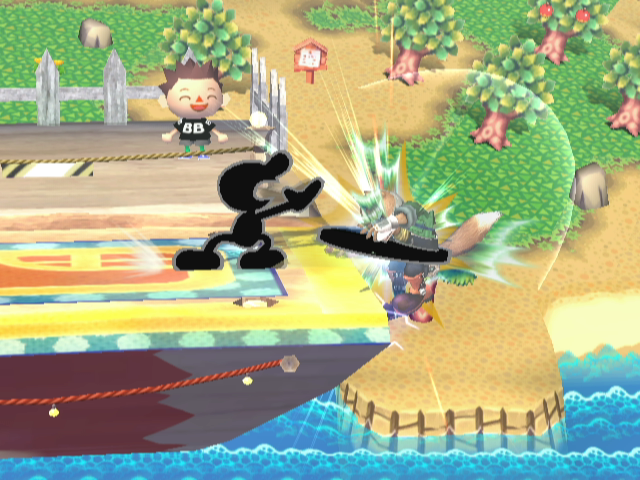 Offensively, Mr. Game & Watch was very solid in Melee: range rivaling Marth's, power rivaling Ganondorf's, and nearly all of his attacks lingering like Luigi's Neutral-Aerial. However, for his second Project M outing it was felt that his old strengths weren't up to the standards set by the top tiers. In addition to the return of his classic moveset, his Smash attacks now have greatly increased power, his combo game is more efficient, and several moves have subtle new buffs. Edge guarding, kill power, safe lingering attacks - G-dubs does all of that better than ever.

His biggest weaknesses remain defense and dealing with pressure. He is still among the lightest characters in the game and suffers from a mediocre roll, dodge, and tech speed, but he now has the functional shield and pressure-escaping Up-Special which he received in Brawl. Combined with his exceptional offense, Mr. Game & Watch makes for an exhilarating and fun "paper" cannon of a character! 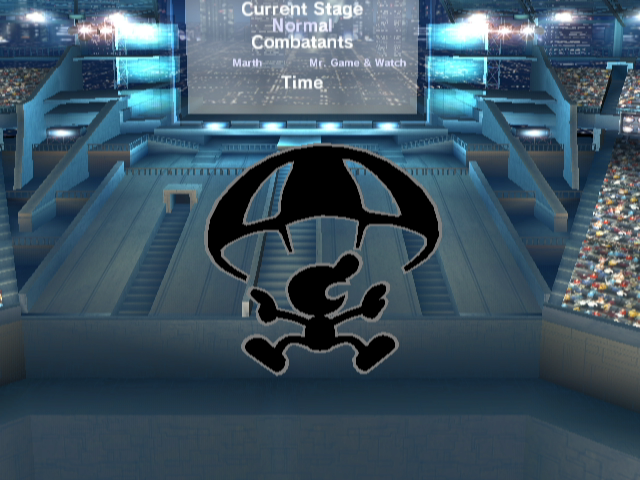 Being able to L-Cancel all of his aerials isn't the only thing new about Game & Watch's aerials! Melee's parachute Neutral-Aerial returns in all its deadly combo-finishing glory! Up-Aerial only hits once and ends incredibly quickly, making it a great juggling move. Forward-Aerial hits slightly earlier while the box is still raised, and is slightly stronger than before. It can be a great surprise hit when someone is coming down from above and Mr. Game & Watch does not have time to deploy his 'chute. Finally, his ever reliable Down-Aerial's landing hitbox now spike-bounces - leaving his victim vulnerable to whatever variety of destruction strikes your 2-D fancy. 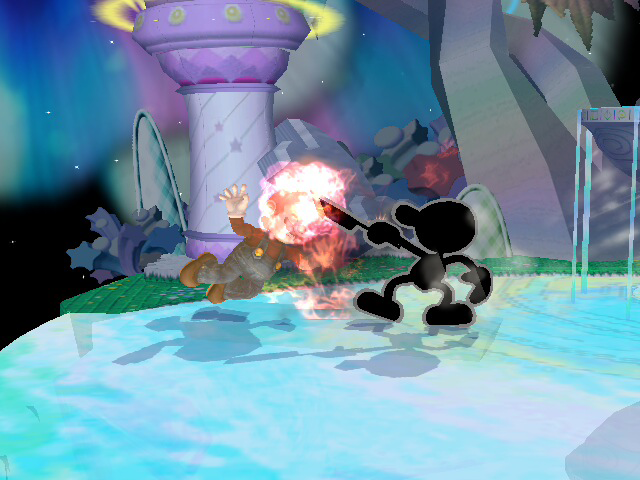 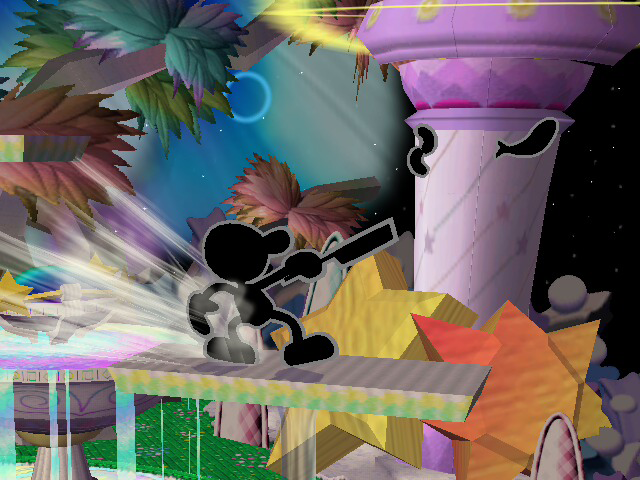 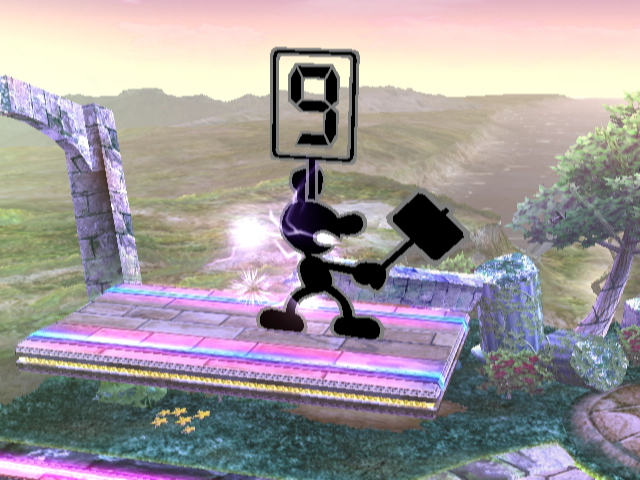 His Chef attack cancels on landing, just like Falco's lasers. Since Mr. Game & Watch can squeeze two bacon out in a short-hop, this gives him an unpredictable new approach. Oil Panic ends more quickly after catching a projectile, and when full will nearly always kill in a single hit. Although he has lost the slow-falling parachute, he retains the ability to act after his Up-Special. Combined with a frame one hitbox and Melee stats, this allows him to continue juggles, often into a Neutral-Aerial, or pressure shields safely. Not to mention it's defensive abilities can help Game & Watch escape pressure himself and mix up his recovery. 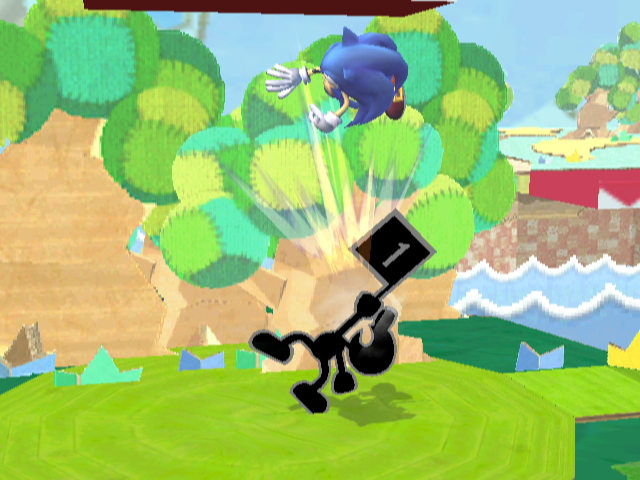 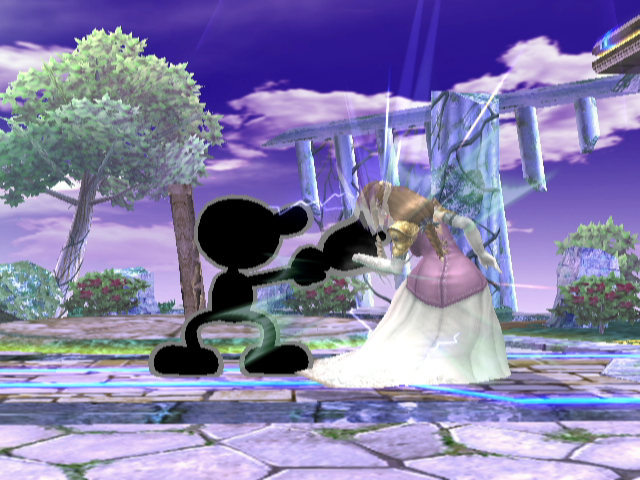 In addition to the classic power of his Parachute and Down-Tilt, many of Game & Watch's stronger attacks now boast potency that makes Ganon jealous. Although slower, his Up-Smash easily outclasses Fox's in power. Don't try to shield it either - lest you lose yours! His Down-Smash can also kill well vertically, when the hammer-heads connect. Don't think the handles are useless though, while they lack strength the angle they send at is deadly. His Forward-Smash has not only regained it's old power, but it also no longer loses much potency as it lingers. And speaking of lingering, his Forward-Tilt can now be interrupted as quickly as the hitbox diminishes - easily catching spot-dodges, decimating recoveries or stuffing approaches.

Of course his ability to combo and rack damage hasn't been negelected - Up-Throw combos nearly as well as his Melee Down-Throw, leading into juggles from Up-Aerial, Up-Special, or even a devastating Parachute finish. Down-Throw is a tech-chase throw, functioning similarly to Fox's or Falco's Down-Throws. Mr. Game & Watch does not let a successful chase go to waste. From a re-grab, to a combo starting Down-tilt or Down-Aerial, to a shattering smash attack the possibilities for mayhem are endless.