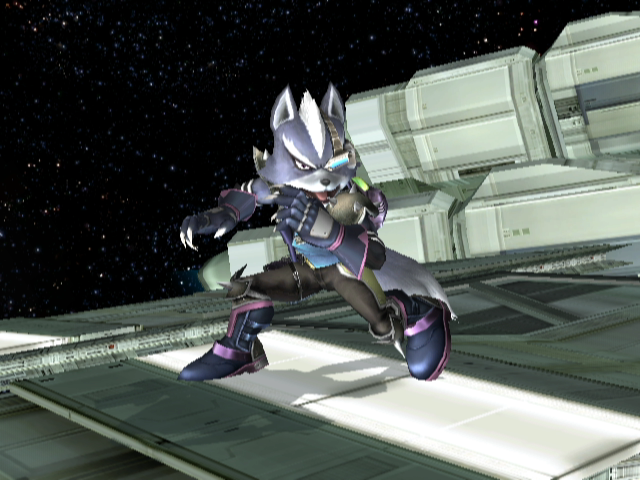 The leader of the Star Wolf team, Wolf O'Donnell, makes his Project M debut! Fox has proven to consistently be a powerful contender in the world of Smash Bros., and rival Wolf O'Donnell is here to finally put the top-tier space-animals in their place. In Project M, we have opted to give him speedy physics similar to the other Star Fox characters, but with the ability to move much faster horizontally in midair. This causes Wolf to feel familiar to people who played Fox and Falco in Melee, but gives Wolf his own unique play style. Most of his moves have been given new purposes in order to better suit his new style - Wolf now has a unique juggling game and many new animations! 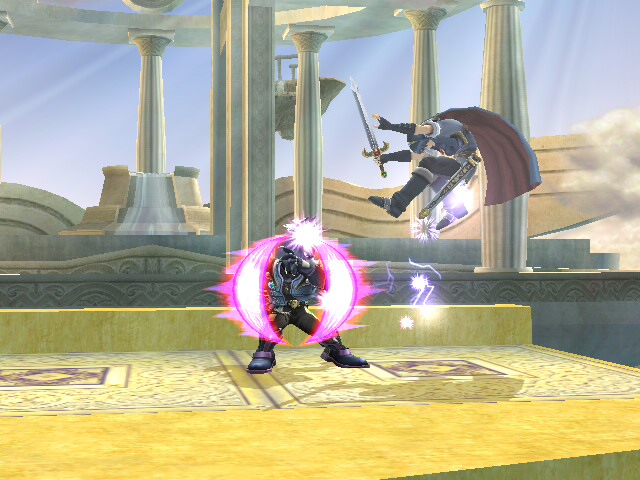 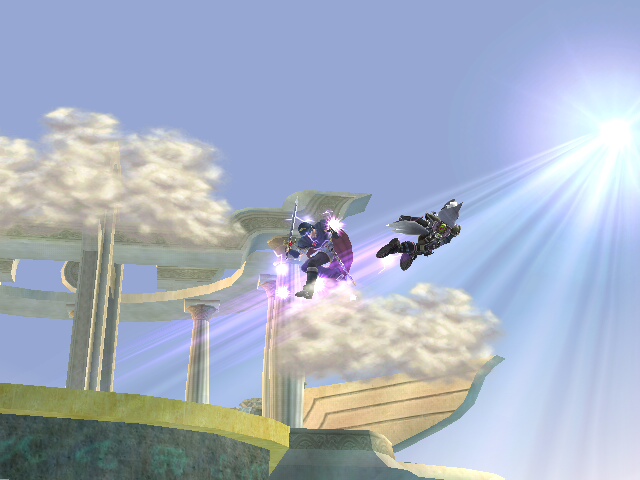 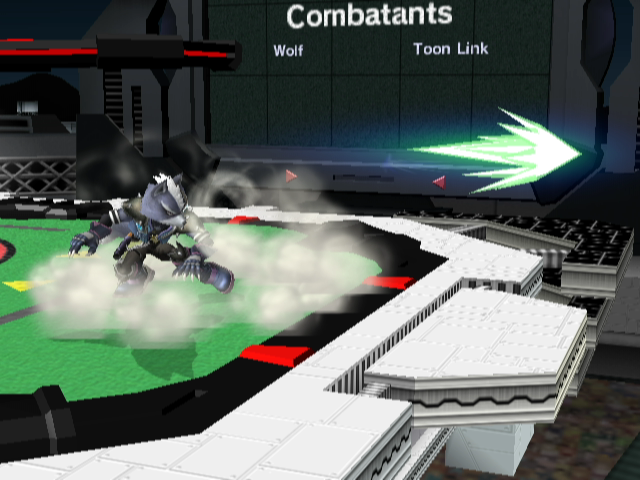 In Brawl, Wolf's reflector sends foes sideways like Fox's, it now sends diagonally upwards and allows Wolf to chase after and combo his foes. It is Wolf's quickest launcher, and it can be canceled with a jump just like Fox's and Falco's. It also has more horizontal range than his rivals' reflectors, but it leaves him more vulnerable from above and below.

Wolf also has his own blaster rifle. However, his blaster shoots stun lasers that are much larger and slower than his rivals' lasers. Even though his lasers are slower, however, it does not mean that they are worse. These slow projectiles require more stringent timing to dodge which gives Wolf the ability to approach enemies in middle range. His projectiles also disappear at a shorter distance than the other lasers; thus his blaster cannot effectively be used from long range. Instead of having a greater range capacity, his gun is equipped with a bayonet that will harm foes at point blank range. Wolf can air dodge out of the ending of his blaster, allowing him to waveland. This is similar to the land cancel that Fox and Falco have.

Wolf's Up B is now is a single-hit aerial dash attack that will send foes flying in the direction which he is travelling. An expert understanding of Wolf's combo possibilities will allow Wolf players to be very creative with this move.

During Wolf's Forward B, Wolf dashes diagonally at an incredible speed, dealing very minimal damage to his foes. It may not sound intimidating, but beware! The end of the animation is a powerful strike and a rewarding kill move. If Wolf hits with the end of the animation, he won't go into free-fall, allowing him to then use another recovery move to get back on stage. Missing with this move is very deadly, so make sure your aim is precise! 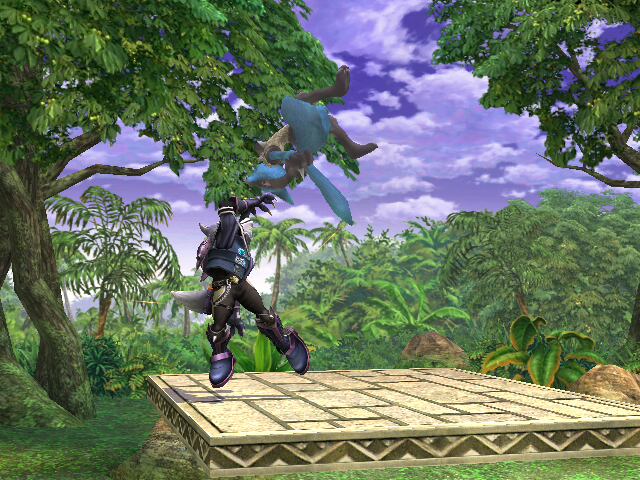 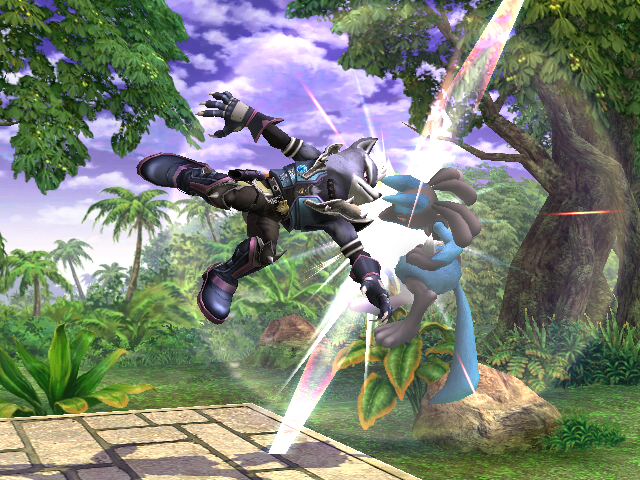 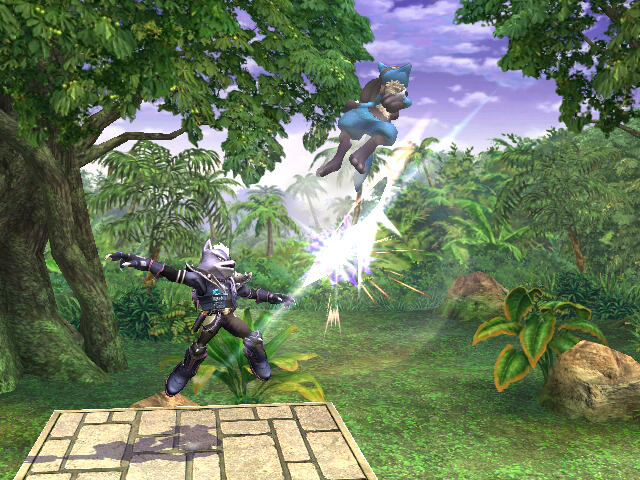 The most notable property that makes Wolf so unique from the other space animals is his ability to launch foes into the air and juggle them more effectively. He has several attacks that can be used on the ground as launchers, such as his dash attack, down tilt, up tilt, and reflector. He can also use short-hopped forward air and down air as effective launchers as well. Wolf can also drag his foes down using his neutral air and quickly follow up with his reflector to launch them!

After Wolf launches his enemies, they can then be kept airborne with his excellent up air that can often be followed with another up air and/or a Forward B depending on how a foe reacts to his attacks. The weaker portion of forward air can also be used for combos, while the sweetspot can be used for both combos and killing at the top of the screen. These moves can, at times, be followed by a well-spaced Side B or by slamming the target downward with the potent Down Air in order to finish the job. Using back air twice in a row should suffice to take down persistently recovering foes. His smash attacks may not be as central to his gameplay as they are for some other characters, but they are by no means weak and can, in the right situations, be utilized in combos to finish off foes.

With these tools in hand, Wolf is a worthy rival to Fox; not only in space, but also on land.