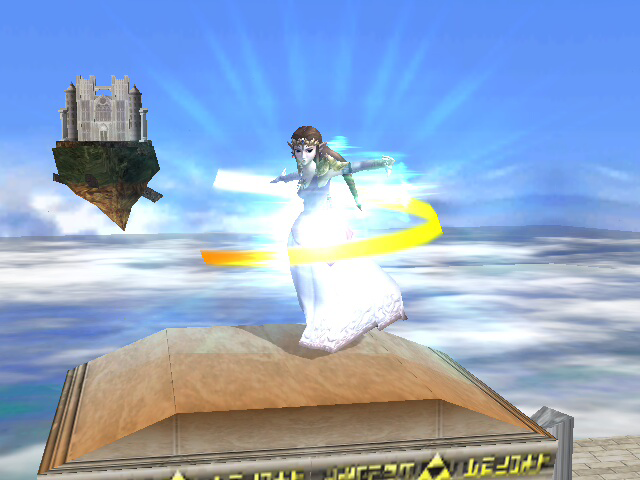 Hyrule's princess Zelda is back for another round in Project M. In Melee, she was completely overshadowed by her alter ego; Sheik. However she has been overhauled in Project M to function as a dangerous self-sufficient character.

Zelda's greatest asset is her defensive game. Din's Fire remains a great attack to use from long distance and is her primary method of controlling space. Her core set of normal attacks also allow her to space in fairly close proximity very well and provide massive disjointed hitboxes that protect her from a good number of incoming attacks, and if Zelda finds herself in a situation where those defenses are penetrated, she can use her Neutral-B or grounded Up-B to regain momentum or at the very least reset herself to a neutral position. Her attacks are also very powerful, having strong KO potential in both the air and the ground.

However, Zelda's mobility is very lacking - she has the second slowest run speed in the game, as well as a small Wavedash, small dash dance, and small jumps. While the new grounded Up-B helps to mitigate long distance movement, Zelda will still have difficulty comboing, approaching, and pressuring from mid ranges. However, Zelda is challenging to combo thanks to her low gravity, but with her low weight that also means that she doesn't have good knockback resistance, making her easy to knock out of the stage if she gets hit with a sufficiently strong attack, especially vertical launchers.

Zelda has always been a more defensively oriented character, and in Project M this is no exception. The innovations in her moveset, however, not only make her more effective as a character, but also require more precision to get the most out of her. 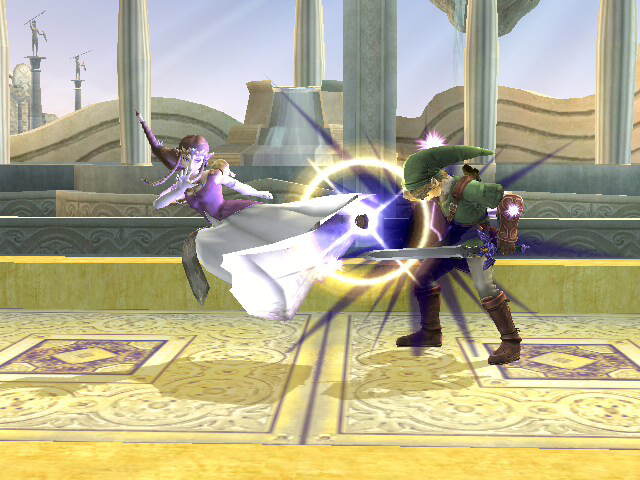 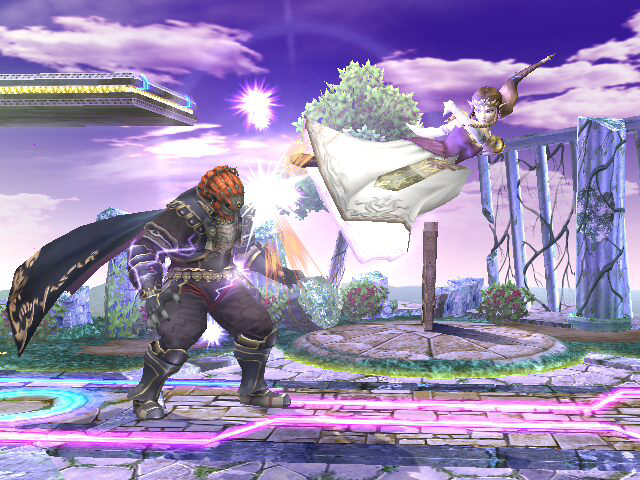 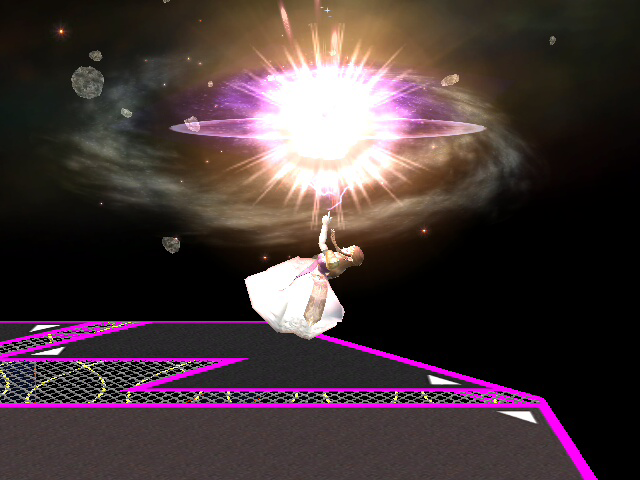 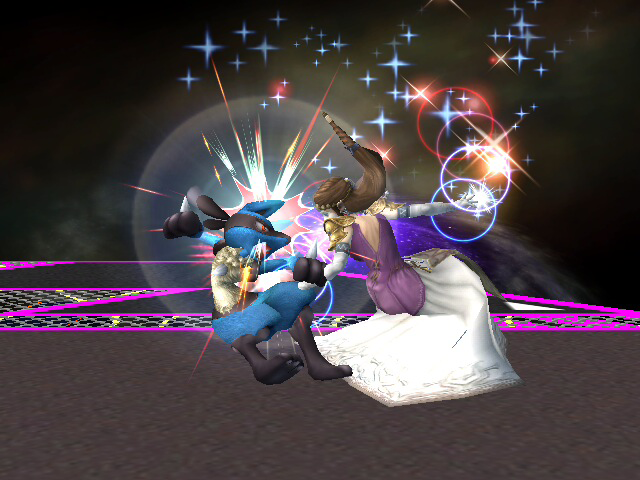 When most people think of Zelda's aerial attacks, they think of her powerful Forward-Air and Back-Air. These attacks have mechanics from both Melee and Brawl. The large Melee sized sweetspots don't deal quite as much damage or knockback as they did in Melee, but are still great aerials with above average range and power. The tiny Brawl sweetspots within them are extremely powerful, but are difficult to land in the heat of battle. Her other aerial moves have also been improved to round out her air-game. Neutral-Air's multiple hits link into each other much better (an improvement that is also seen on the rest of her moveset) and the hitboxes are larger. This makes Neutral-Air a better option when an opponent is too close for a directional aerial to be effective.

Down-Air has also been made to sweetspot on grounded opponents in addition to aerial opponents. Finally, Up-Air has an early hitbox at the base of her fingertips inspired by the female wireframe's Up-Air. It can combo directly into the explosion right afterward or into a different move if autocanceled. Up-Air's sweetspot is unchanged: it remains inside the fireball itself and retains its strong killing potential from Brawl when aimed just right. 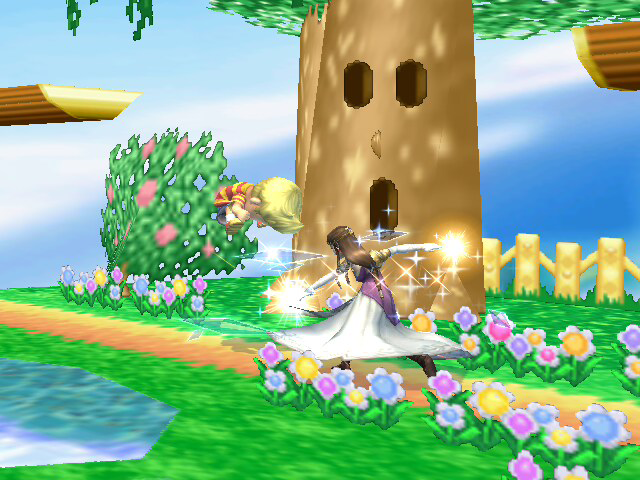 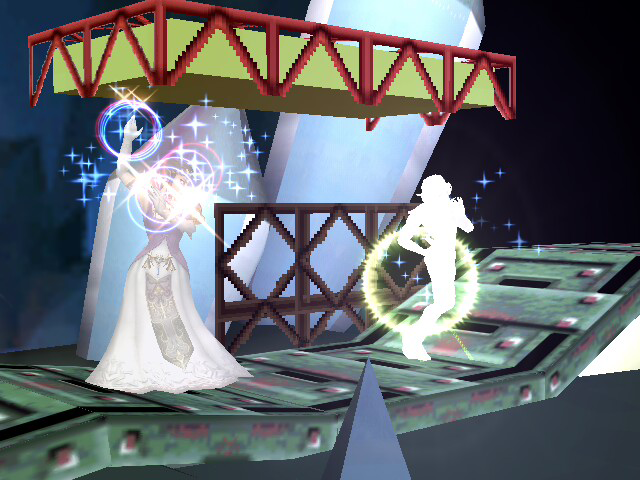 Most of Zelda's specials have undergone radical changes. Din's Fire no longer functions like it did in Melee and Brawl. Din's Fire still begins with Zelda sending out a fireball - however, instead of exploding once the B button is released, the fireball stays suspended in the air with an active hitbox for roughly three seconds. Contact with this hitbox deals minor damage and knockback, but if the fireball is allowed to tick fully and explode, they do so with great force! This attack cannot be reflected or sent back at Zelda, but can be canceled out completely by the opponent's attacks. Zelda can only have one Din's fireball out at a time, but she can also press Forward-Special again to detonate the fireball and set it on a path back to her!

Farore's Wind can be cancelled early by pressing the B button, giving Zelda the ability to stop at any time during the duration of the move, giving her a good movement option over long distances that she otherwise lacked. The reappearance hitbox from Brawl was also retained to give her a degree of protection when coming back to the stage. Her other special attacks aren't as radically changed: Nayru's Love is land cancelable after the attack frames end, and the ground based version has improved invulnerability but no such cancel. Transform will detonate any Din's Fire currently set on the stage, and is slowed down at the beginning of the move but allows Zelda to act out of it instantly to compensate for variable load time issues. This change to Transform is also shared by Sheik. 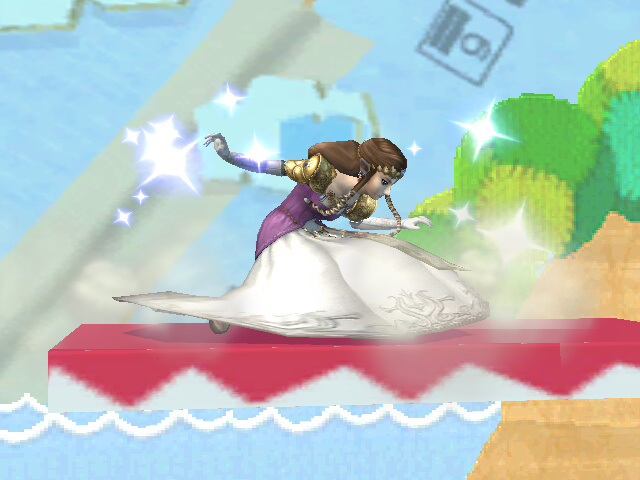 Though her Up-Special and Forward-Special were briefly touched upon in the previous section, the changes to them can be jarring to both new players and veterans alike; however, they both open up a new realm of stage control that was previously unavailable to her in previous Smash games. Much like Snake, Zelda can control space exceedingly well with her mine-like Din's Fire. Its lasting presence makes it a threat as Zelda is able to move and combo into and around it.

Needless to say, having a static fireball on the field also reduces the opponent's mobility - formerly safe responses to Zelda's zoning can be rendered unsafe with good placement of fireballs. Placing a fireball where the opponent could roll or jump to is an excellent way to make the opponent feel trapped and immobile. A fireball above or behind the opponent can also lead into powerful follow ups if they are knocked into it. Farore's Wind has great synergy with Din's Fire as well: in addition to giving Zelda a method of escape and the ability to chase opponents from relatively long distances to maintain pressure, strategic placement of Din's Fire can allow Zelda to use Farore's Wind to warp to a location that the opponent feels is safe from the fireball and punish accordingly.